Blog » The Game » How I Became a Disc Golf Organizer How I Became a Disc Golf Organizer

Why would anyone in their right mind start a disc golf club? Well the simple answer is to have fun and create community. Isn’t community an important aspect of being human? I remember my humble beginnings as an organizer in Vietnam, but the story doesn’t begin there.

I fell in love with the sport while doing a short stint as an adjunct professor in Oklahoma. I found myself with extra time on my hands between lectures and grading, so I decided to look into disc golf. I had played ultimate in middle school and played golf my whole life, so I’m not so sure why I ended up getting into disc golf so late in the game. I began to play in and around Norman, Oklahoma with a DX starter kit. Almost immediately I ran into a 9 person card on the 17th hole of my local course. These people were so friendly and grungy I immediately fell in love. They told me I should join their club, Grip Lock. Yes, within my first solo round I found myself in a family.

I remember leaving them feeling giddy and saying something embarrassingly stupid like “I’ll see you all out on the links”. To make a long interpersonal story about finding community in the heartland of America short, I left 5 months later with a bag full of donated discs on my way to Vietnam to continue my adventure as a professional educator.

I had heard there was a club in Vietnam, so upon landing I went to the weekend mini tournament of the Saigon Disc Golf Club.

Now, Vietnam is no Oklahoma, yes there is heat, humidity and bbq, but it is almost a new world entirely. As my luck would have it, my first round, I was partnered with the club president who was a tall, dark-haired, math teacher that was not entirely pleased to be partnered with some newcomer. I ended up carrying the team (even less to his pleasure).

The course in Vietnam didn’t have baskets, they had 5 inch PVC pipe hanging from trees and a few trees marked with basked sized tape bands. The club consisted of a small band of expats and Vietnamese (mostly current and ex-girlfriends of said expats; although we did have an amazing Vietnamese ultimate player). This became my new community in a new world.

Disc golf brings people together in a way that few other things can. Unfortunately it was a 45 minute commute across one of the more dangerous labyrinthian road systems of the world…by motorbike…

My housemate and I (we met through the club) decided we needed to locate a new course closer to our neck of the woods. We took the birds eye view of google and hunted for open land in the overly congested megacity of Saigon. What we found has since become the Saigon Oasis. Shortly after discovering this paradise of palm trees and walking paths our old course was taken over by development and thus began my transition to a disc golf organizer.

I’m a competitive person by nature, so naturally I craved more. The president said he was creating a new target and my housemate decided he was an engineer and could make a much superior target, unfortunately I beat everyone to the punch. I designed a new tonal made of bamboo, string and pvc pipe ends that had the satisfying movement and sound that our beloved game thrives upon. The Saigon Oasis evolved from a pop up course with one movable basket into a permanent heaven for the cultivation of the true disc golf spirit. Unfortunately I didn’t stop there. I wanted more control, more creative leeway. I chafed against the rigidity of the math teacher president and spent my time creating new teepads, fairways, ob lines and built more “Khyber Tonals” (if you can’t tell I have an ego problem by this point of the story).

I always made time to play, whether it be expats passing through or locals who were surprised by sweaty people whipping plastic plates through their peaceful park at dangerously high speeds. I moved into the apartment complex next to the park and started a disc golf summer camp for young Vietnamese children whose parents wanted to get their kids outside away from ipads and tvs.

The course continued to develop, not just from my own ideas, but from listening to the thoughts and ideas of players with more experience than I and observing how new players played. Pretty soon we had an 18 hole course with a myriad of disc golfers from of all ethnicities and walks of life (really, mostly expat teachers and white collar Vietnamese…).

Although I ended up leaving Vietnam after 3 years, the course I helped found and create is still in use and has recently acquired permanent baskets! Taking all that I learned abroad I returned home to California to start a new disc golf club with the recent founding of a new course in my area. My experience going from a new player in Oklahoma to a course founder in Vietnam and finally to a disc golf club founder in California has been an eye opening experience. Yes designing, building, and organizing things is work, but the reward is growing a community. There is nothing more rewarding than bringing people together for a good time.

If there is any advice I can give to other inspiring disc golf organizers it is to listen to others, but also to take action. You will only learn by doing and only by doing can you make this amazing sport grow. Go out, talk to people, listen to people, and make it happen. Being an organizer has been one of the most rewarding experiences of my recent life, so I recommend going out there and getting involved. 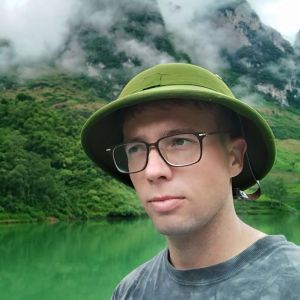 Khyber Hill is a professional educator, world traveler and disc golf enthusiast. He is the co-founder of Beñejo Disc Golf and co-designer of the Saigon Oasis Disc Golf Course in Ho Chi Minh City, Vietnam. He has traveled to over thirty countries around the world and designed his own unique disc golf target. He has a passion for writing exciting content that engages readers and pushes the bounds of the mundane.

These great organizations are growing the sport of disc golf both locally and globally. Consider taking some time to see what they are doing and get involved! Have another? Contact us! How to Improve Your Approach Shots – Putters only